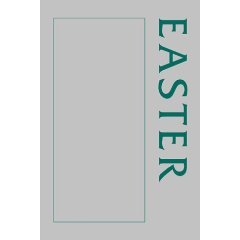 HERE ARE TEXTS tO help in keeping the fifty days of Eastertime, the great pentecost, the space of rejoicing. They are drawn from sources new and old to cast light on the liturgy and the life of these days and to assist in communal and private prayer. It was anciently so: those who had been baptized and anointed and admitted to the table at Easter were led, during the fifty days which followed, more deeply into the mysteries which they had now entered.

Here are some of the words to help this mystagogia, this unfolding of the mystery of God and church, take place. They are arranged within the fifty days of Eastertime. Each day begins with a single verse from scripture. This verse is like an invitation to see and marvel at yet one new name Christians have learned and have treasured. After the verse come long and short texts from various places and times. All these texts then, arranged within the weeks of Eastertime, lead us into the meaning of our baptism, lead us to the table. They show us the world under the light of Easter.

HERE ARE TEXTS to lead us into the risen Christ and so into God.

These texts are meant for the neophyte, come this Easter to the waters of life. They are meant for all of us who in this paschal observance are creeping back to those same merciful waters which poured over us. The texts flow from the first day, Easter Sunday, to the fiftieth day, Pentecost. Used singly, these texts may become a source of reflection in creative counterpoint to the church's assemblies for liturgy and for teaching. Used within a pattern for daily prayer, such as the one provided at the close of this book, the texts may themselves contribute to communal liturgy or to the prayers of an individual or household. In this latter case the book becomes a prayerbook for the newly baptized Christian and for us all.

When the order for daily prayer is used (see page 159), one should note that either a simpler pattern marked with (call to prayer, verse of the day, meditation, prayer for the week), or a fuller pattern (call to prayer, psalm, verse of the day, meditation, silence, canticle, intercessions, prayer for the week) may be followed. Into either pattern is then inserted (as "verse of the day") the biblical passage quoted at the outset of the material for each day and (as "meditation") one or more of the longer quotations included for that day.

HERE ARE TEXTS for prayer in the church of the risen Christ.

But how shall we find words for the resurrection? How are we able to bring to expression the conquest of death and the harrowing of hell and the washing which has joined us to God's own life? There are no words. Or, rather, there are only the wrong words--metaphors, chains of images, verbal icons--which invite us into the mystery which is beyond words. So, in the book which follows, the resurrection is the new creation, the great feast, the ark come through the flood, a rich pasture, a lovers' garden, the eternal palace, the heavenly temple, and the city that has awaited our return for years. It follows that to be baptized is to be re-created, to come to the table, to survive the flood, to hear the voice of the shepherd, to be beloved of God, to be heir to the throne and priest to the temple and citizen of the Spirit-formed city. And the risen one is the word of creation and light itself and table and bread and lamb and rainbow and olive branch and shepherd and stream and tree of life and well and heir and shield and temple and priest and center point of the city. In short, as Damasus says at the end of this book, "Jesus Christ is everything."

While this book thus joins the modern quest to find images adequate to speak of God and of whole human life, the antiquity of many of the texts found here demonstrates that we have rich company in our quest. Already the pattern of readings in the liturgy of Eastertime proposes to us that life in Christ is seeing the wounds of Christ at table (in the second week), encountering the good shepherd (in the fourth week), adoring the ascended Lord (in the sixth week), and coming into the city of the Spirit's descent (on the fiftieth day). Such language fills the liturgy! An introduction into the mysteries of the church and into the spirit of the liturgy is also an introduction into such language.

HERE ARE TEXTS which may function as a primer for the sacred speech of prayer.

What is intended in the images of this book is not an exhaustive and reasoned essay on the meaning of the resurrection. What is intended? Windows and doorways opening into the mystery of life given us through our baptism into the passion of Jesus Christ. In each week's cycle of images, there always comes some water image, meant to evoke baptism as our continual introduction into God's mercy. And so, too, throughout these Easter weeks, some note of suffering recurs: the risen one still bears the wounds, and the bringing of risen life into human suffering is the very mercy of God in which we live.

Each week's images are clustered around a central image, proposed first on Sunday. The second week of Eastertime has us, the baptized, brought to the table of salvation; the seventh week leads us to the heavenly temple. Then our imagination explores: We taste the foods and find that even ancient Leviathan is served up for us to eat there. Or we become the priests and walk about the altar under the cloud and the fire. Sometimes these images follow patterns, as in the first week of Easter when the seven days of creation are recapitulated in the risen Christ. Sometimes the images are like chains, as when palace becomes temple which becomes city. Sometimes they are like events, as when "crown" occurs on the fortieth day, Ascension Day.

When one is unfamiliar with such liturgical and symbolical language, some suggestions for its use might not be out of place: Hold together in your mind the image proposed, the biblical verse for the day, and the play of the meditations. Remember that it is Easter. You stand before God in the risen Christ, among Christ's people. You are baptized. Let the words become a doorway into the feast, which is filled with Christ. Listen to the words. It may be the risen one who is spoken about. And it may also be the baptized people, the church, who have been made alive by the resurrection. It may be your own heart. It may be the God before whom we stand.

These all are part of the feast. So, for example--would to God that there were a temple, a place where humanity might be face to face with the true God and where the mercy which promises to wipe away all tears and to speak all justice might at last be known as dwelling in the earth. In the resurrection of Jesus Christ that temple is built. It is present just where we thought it was absent, in the midst of the places of human need and injustice and death. You have been washed into Christ, and so you are part of the temple. You are brought to the holy things. Here is the altar and the fire and the water to heal all things. Here is the very presence of God. Jesus Christ is the temple.

Finally, the greatest image for the resurrection and the baptized life is not a verbal image, but is the very days themselves: Our fifty days of Eastertime, our pentecost, is a week of weeks and a final great eighth day, a jubilee, a single day that is fifty days long, a foretaste of the everlasting Day of God. Abbot Patrick Regan writes:

The fiftieth day, the final day of our pentecost, the day we call Pentecost, is the summation of the days. It witnesses to all that the days have contained--the resurrection of Christ and the renewal of the earth and life in God and all the meaning of the images--is poured into our hearts continu- ally by the Spirit alive in the community.

HERE ARE TEXTS for the Fifty Days. - Gordon Lathrop (from the Introduction)