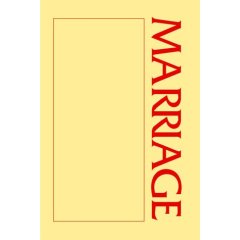 Marriage is unique among the sacraments in that each celebration may be fashioned, to a great extent, according to individual and cultural tastes. As ceremony, then, no two weddings are exactly the same; as lifelong sacrament, no two marriages are the same, either. The bride and groom participate in--no, co-celebrate--their sacrament, but it is a sacrament that, despite individual manners, signifies a universal union. The celebration of marriage, like all the sacraments, draws and holds the church together in the reaffirmation of our core beliefs. Marriage's celebration of the life of faith is a gift shared by all who witness it.

Three intersecting, complementary relationships lie at the heart of the sacrament of marriage: 1) the marital relationship, the joining of bride and groom; 2) the reliance on God shared by bride and groom; and 3) the bonds between the community gathered and the wedding couple. Fittingly, the circle is the symbol most often associated with the sacrament. Whether it is described by wedding rings, by crowns or by lassos, the circle operates as a symbol of constancy, a sign of the continuity and endurance promised on wedding days.

Because marriage, like all sacraments, enacts the words of liturgy, this book is organized around blessings and vows associated with various marriage rites, one of which begins each section of the book. This structure, though, is no more linear than the course of married life; the concerns of each invocation resound with the promises of the ones that precede it and the ones that succeed it. Similarly, marriage as it is lived is not a series of graduated steps where one vow, like some finite task, is mastered and then left behind. The rejoicing of the wedding must be woven into the fabric of the everyday, as each member both individually and jointly seeks to integrate--to knit--their wills together, and to the Will of the Lord. The texts within and across each section bear the circle metaphor out, for the meditations gathered here continually return to and repeat common themes, like a wheel--or a ring--spun to catch the light of God's grace.

The circle that encompasses marriage as sacrament begins with the first meeting and initial steps of a committed love. Though it may not be good for the adam--the first human being--to be alone, the adam should not unite until the promise of fidelity for all the days to come can be vouchsafed. The Latin root of "fidelity," fidelis, boldly announces the compact of the marriage vows, a compact stitched together with threads.of faith in one another and faith in God. The circle of marriage includes God, greeted with gratitude, who has bestowed love and union as gift.

Celebrating God's gift is a recurrent act. Just as we return again and again to the eucharist and the present reality of the Lord's sacrifice, so, too, do the bride and groom return to the presence of the Lord in their daily life. The spouse is a figure of God's presence, perpetual source of strength and comfort. In response, each spouse renews and reconsecrates the sacrament each morning, buoyed by constant growth in and with the other and God.

The marriage thus strengthened and renewed radiates out to extend the circle. Though the two are made one flesh, this union is but an indication of the larger marriage of God with humanity made manifest in community. As Christ is sign of sacrifice and faith in God's will, the wedded couple stands as sign of equally devoted love and of the promise of unity to come. The sign, though, is not static. The couple's love for one another grows and is reenacted with each new day; the love and unity they represent takes root in the fruits of the marriage--children, when God wills, and the circle of others reached out to from the grace and affection of the marriage union. The strength of the partnership, Rachel Reeder has written, "resides in the multiple relationships of the kingdom, for marriage is a sign of neighbor love as the eucharist is a sign of God's love."

The circle of marriage includes not only multiple neighbor relationships, but also a multileveled relationship between spouses--excluding no pain and no joy. The kingdom of heaven lies along the path of unity. While the path of marriage is often paved with joy, the journey is not always one of ease. Each marriage is fraught with the perils of detour and losing one's way; but the faults in the road are also shared, if not celebrated, as opportunities to repair and strengthen the bonds cemented by God's grace.

This book is offered in acknowledgment of both the joy and the struggle of marriage. Where love and honor are promised, the task can never be taken easily or lightly, but at its core, marriage is lifelong sacramental act which con- secrates a covenant lived under the sign of, and as a sign of, God's grace and love. - Kevin and Joni Gibley (from the Introduction)

This item does not qualify for free shipping. However, normal shipping applies and there is never a surcharge.