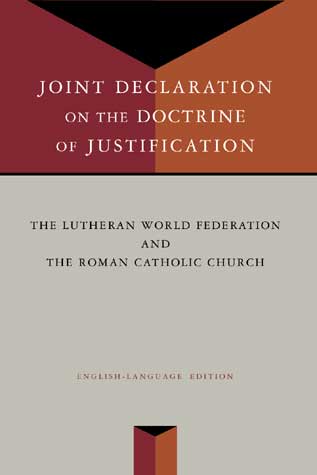 JOINT DECLARATION ON THE DOCTRINE OF JUSTIFICATION ($8)*

The official English-language edition of a historic church document

This volume presents in English the official Joint Declaration on the Doctrine of Justification, confirmed by the Lutheran World Federation and the Roman Catholic Church in Augsburg, Germany, in October 1999. The result of decades of Lutheran–Roman Catholic dialogue, this primary document represents an ecumenical event of historical significance.

Included in the volume are the Joint Declaration on the Doctrine of Justification and the Official Common Statement with its Annex. These texts are recommended for careful study in seminaries and parishes and for reading by individual Christians. It is hoped that the Joint Declaration will deepen understanding of the biblical message of justification and also serve to further reflection within the wider ecumenical movement.

(Purchase of this title helps you qualify for the free shipping option if it is being offered at the time of your order.)