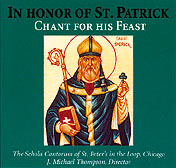 Available on CD or cassette. Please indicate your preference when ordering. If ordering the cassette, the price will be adjusted upon receipt of your order but will not be reflected on your program-generated receipt. Prices are as follows: