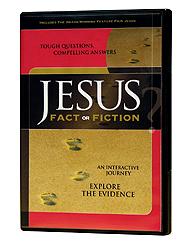 Answers to tough questions about Jesus and Christianity: When audiences leave theaters following Mel Gibson’s controversial new movie “The PASSION of The Christ,” many will be asking these and other long-debated questions surrounding Christianity and its centerpiece, Jesus Christ. But thanks to a new interactive DVD called “JESUS: Fact or Fiction?” skeptics and searchers alike won’t have to wait for those answers.

”’JESUS: Fact or Fiction?’ is designed for today’s tech-savvy users, those who desire instant information and cutting-edge technology,” said Paul Eshleman, director of The JESUS Film Project. “People are going to want to know the truth about Jesus after seeing ‘The PASSION of The Christ,’ and this DVD has the answers.”

“JESUS: Fact or Fiction?” also includes the “JESUS” film with special new features. Dr. Paul L. Maier is the Russell H. Seibert Professor of Ancient History at Western Michigan University. He received a Master of Arts degree from Harvard University and a Master of Divinity from Concordia Seminary. He then pursued post-graduate studies as a Fulbright scholar at the Universities of Heidelberg, Germany, and Basel, Switzerland. He received the Doctor of Philosophy degree (summa cum laude) from the University of Basel under the supervision of Karl Barth and Oscar Cullmann. Dr. Maier is a specialist in correlating data from the ancient world with the New Testament. In 1984 he was named "Professor of the Year," as one of America's 25 finest educators, by the Washington-based Council for Advancement and Support of Education. He currently travels and lectures widely and appears frequently on national radio and television.

Professor Maier has published more than 200 articles and reviews in general and professional journals. His first documentary novel, Pontius Pilate, received wide critical acclaim and has gone through numerous printings, editions and translations. He has also authored a trilogy of books on the life of Jesus and earliest Christianity (now published in one volume), In the Fullness of Time -- A Historian Looks at Christmas, Easter and the Early Church. Dr. Maier’s many other books include: The Flames of Rome, A Man Spoke a World Listened , Josephus: The Essential Works and Eusebius: The Church History.


Available on VHS or DVD. Please indicate your preferences when ordering.